You are here: Home / DevOps / GIT Hand Book for Beginners

It shows the process flow with components used to perform certain tasks:

Version control is the management of changes made to the code, documents, programs, large sites, and other information. The changes are termed as versions.

A version control system (VCS) is used to perform the following:

There are two types of version control systems: 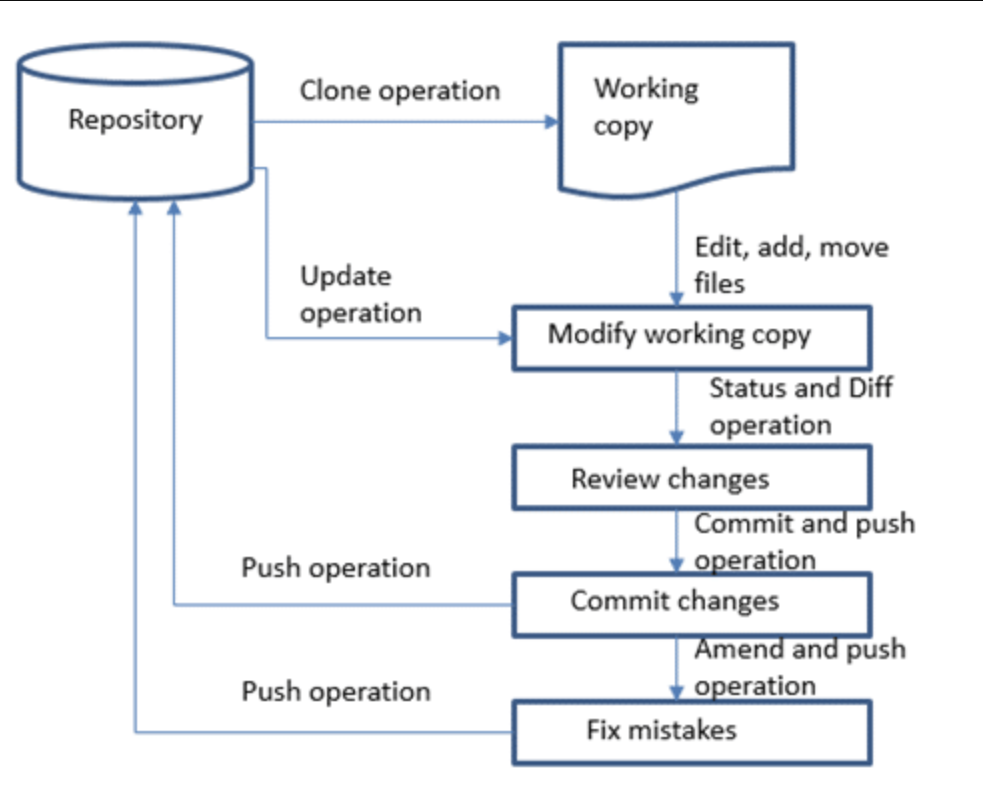 Its features are as follows:

Git Configuration : For the initial configuration of username, email, and code highlighting (optional):

To know the status:

To add a file:

To add all the updated files:

To amend the last commit or the last message:

To create a remote repository via GitHub, go to:

To add a link:

Be it a designer, a creator, or a developer, all deal with projects and files every day. Our primary work cycle revolves around creating a file, saving it, editing or making required changes, and saving it again. In this Git tutorial, we will be focusing on What is Git? and thereby understanding the life of a developer. 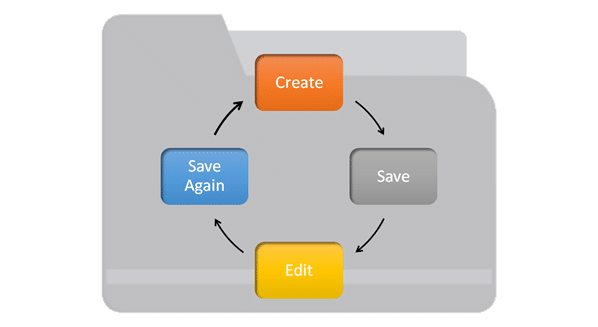 Git is a small yet very efficient version control tool. It helps both programmers and non-programmers keep track of the history of their project files by storing different versions of them.

Git has become significantly popular among developers in the last few years in such a way that if one is part of the developers’ world, it is expected that he/she knows Git.

Git helps developers keep track of the history of their code files by storing them in different versions on its own server repository, i.e., GitHub. Git has all the functionality, performance, security, and flexibility that most of the development teams and individual developers need.

Below are some of the facts that make Git so popular: 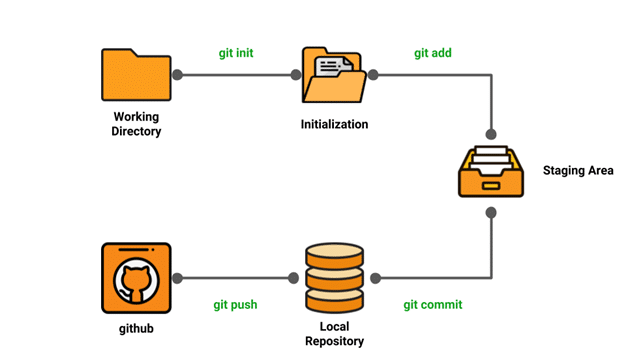 After accomplishing these steps, our GitHub page should look like this:

To tell Git who we are, run the following two commands: 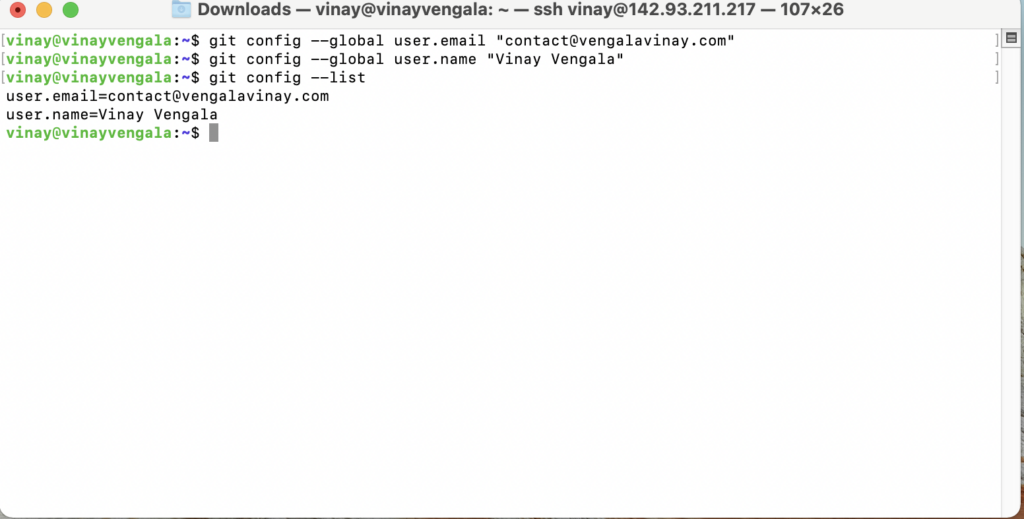 We will divide the common Git commands into two primary categories:

git init: We use the git init command to initialize a Git repository in the root of a folder 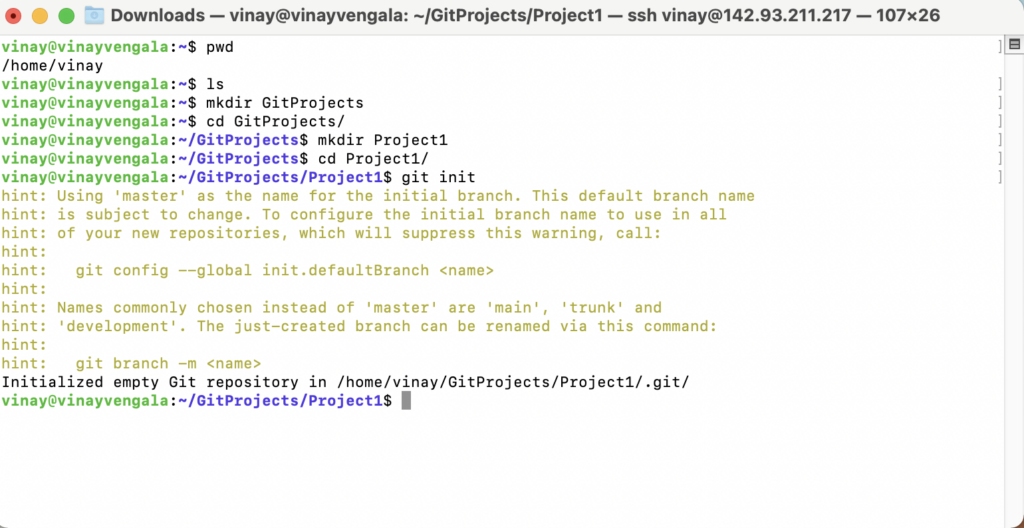 git touch: To add files to a project, we can use git touch. Let us see how we can add a file to the Git repository we have just created
Step 1: Create a new file with the command touch
Step 2: See the files present in our master branch 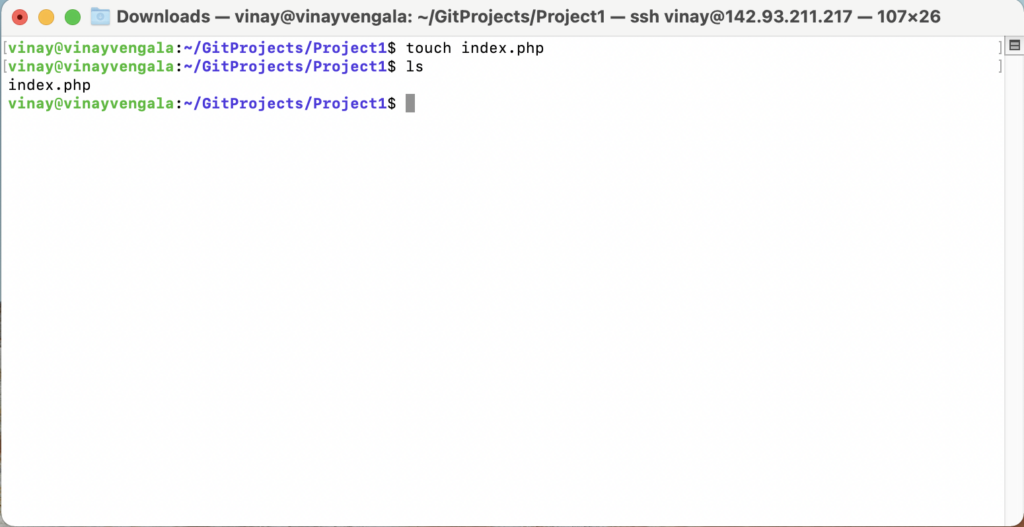 git status: After creating a new file, we can use the git status command and see the status of the files in the master branch. 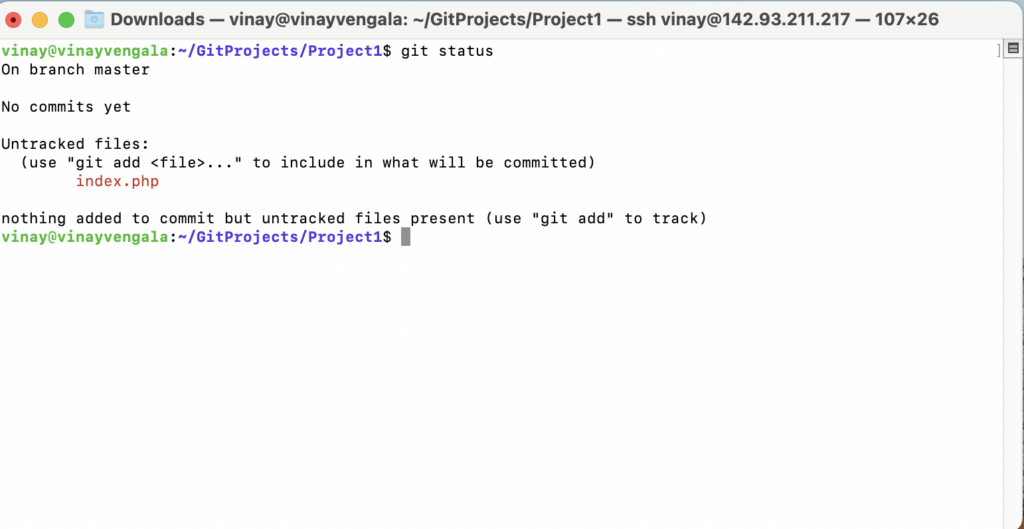 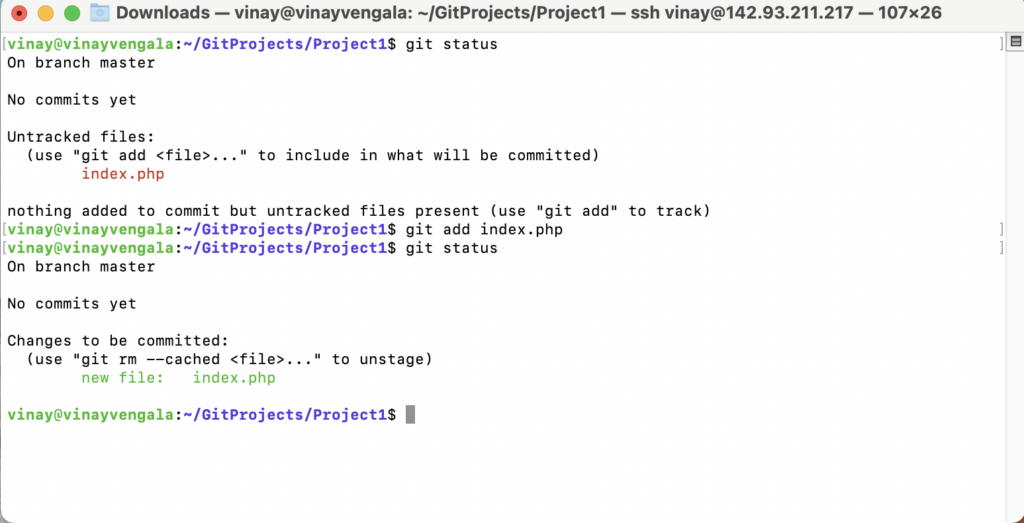 git commit: Now we will use the git commit command as shown below: 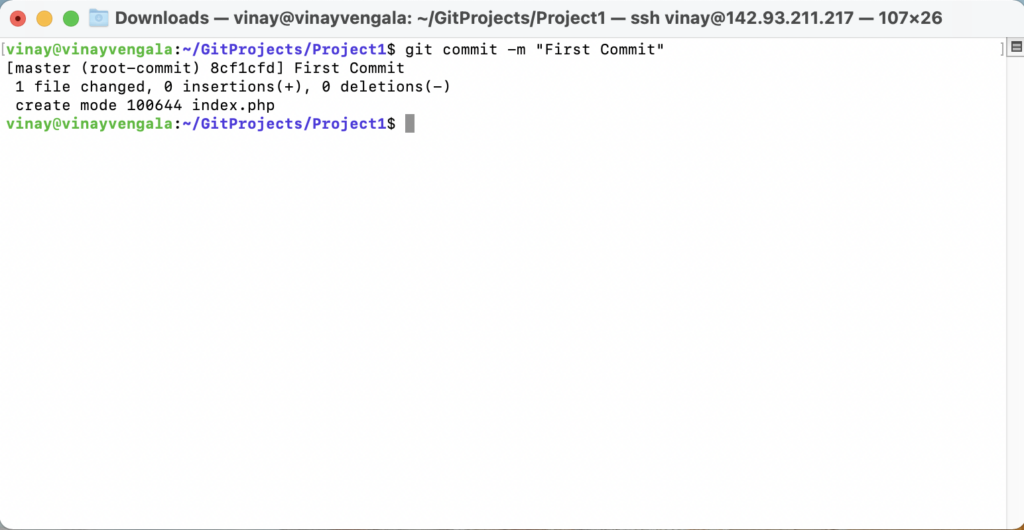 Thus, we have successfully created our first commit. 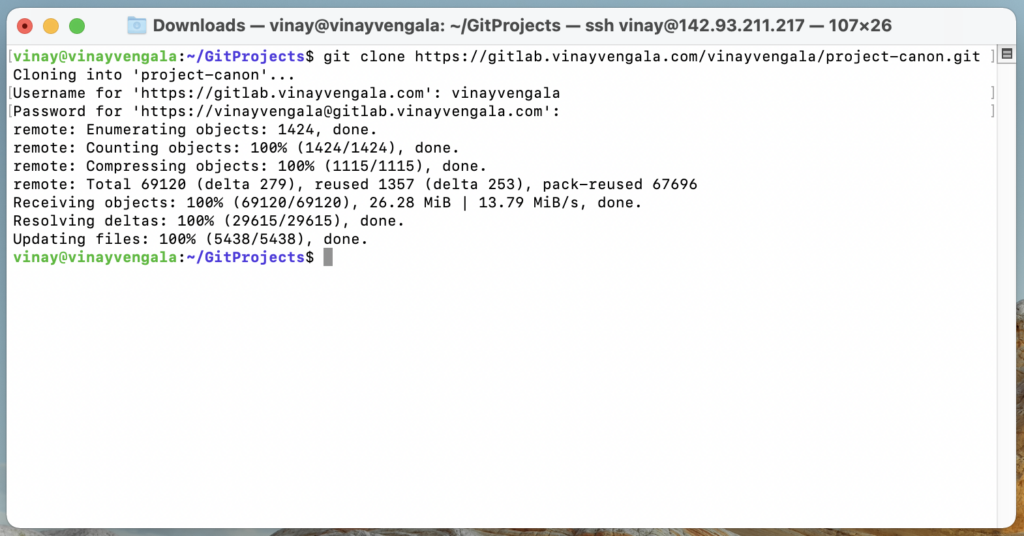 Let us now discuss the remote commands such as remote, push, and pull in Git. For that, we will create a new repository in our Self hosted GitLab server but you can create an GitHub/GitLab account. 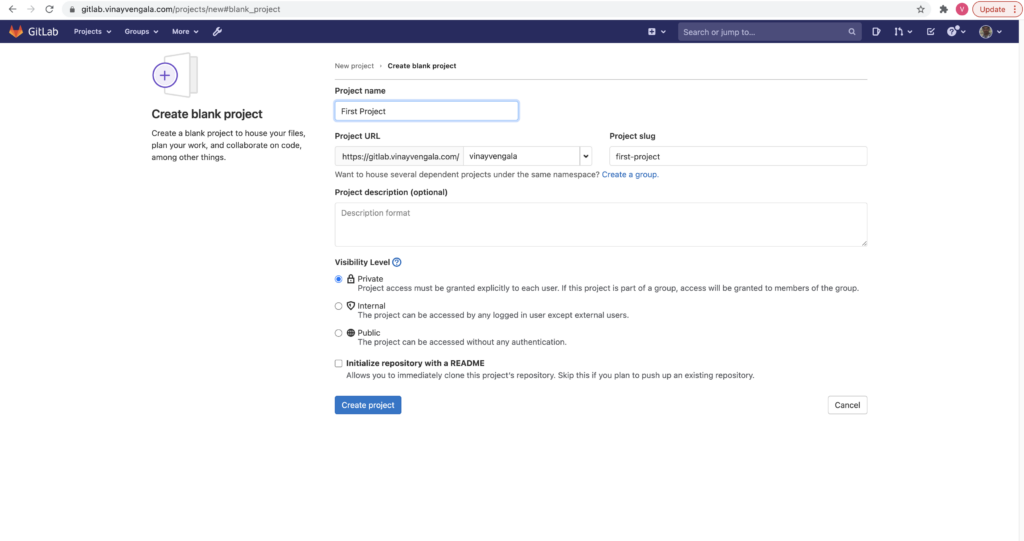 Once we are done with filling up the new repository form, we should land on a page like the following: 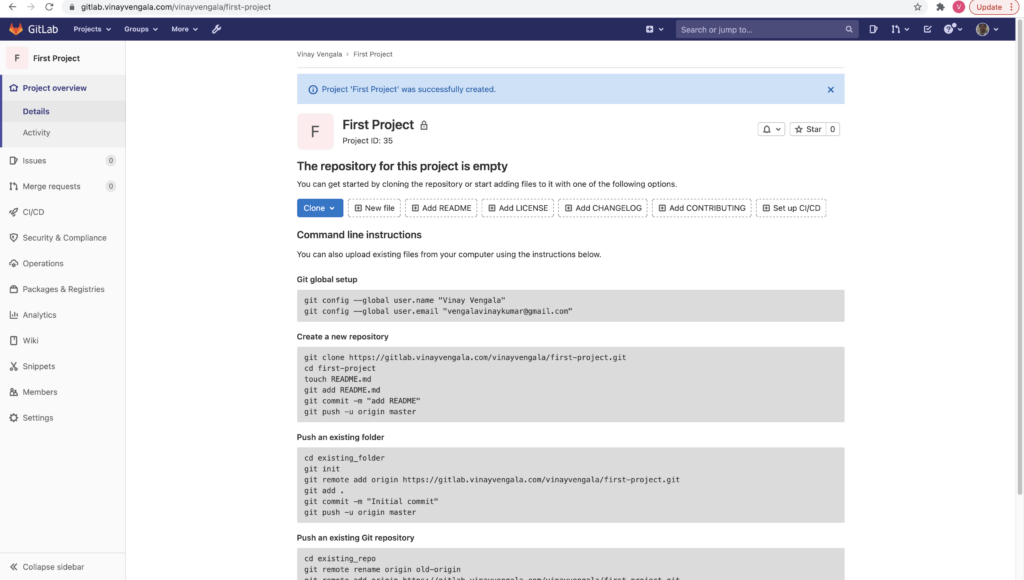 Now, we are ready to operate remote commands in our repository that we have just created.

To push an existing repository to a remote repository from a command line, follow the commands given below. 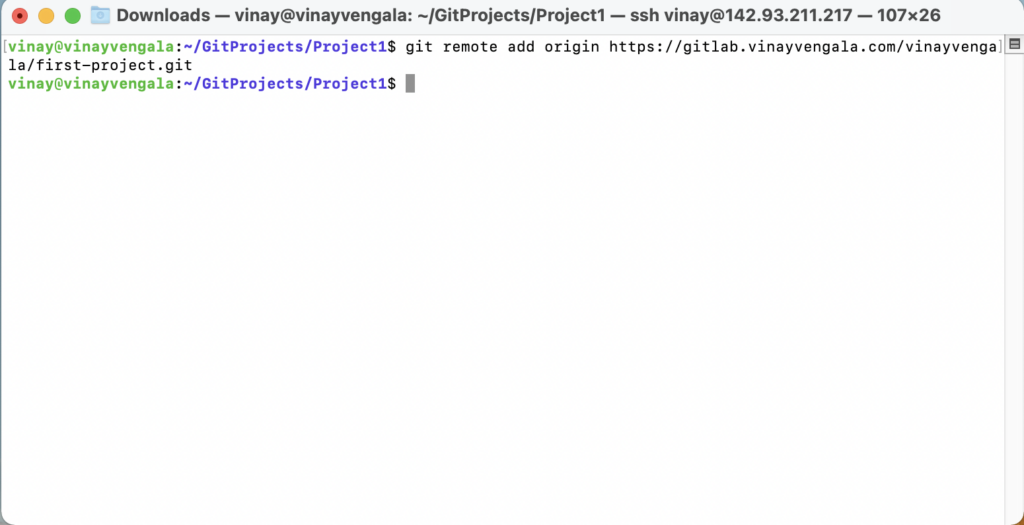 After this, to push the files into repository we will provide the following command, it will ask you for the git credentials and if your system is authorized with ssh it will not ask you for the authorization.

Don’t get confused by the word ‘origin’. What exactly is this command referring to?

Instead of writing the whole Git URL, like git push [email protected]:Git/Git.Git ourbranchname, we can just use the following command, assuming that our brach name is ‘branch1’: 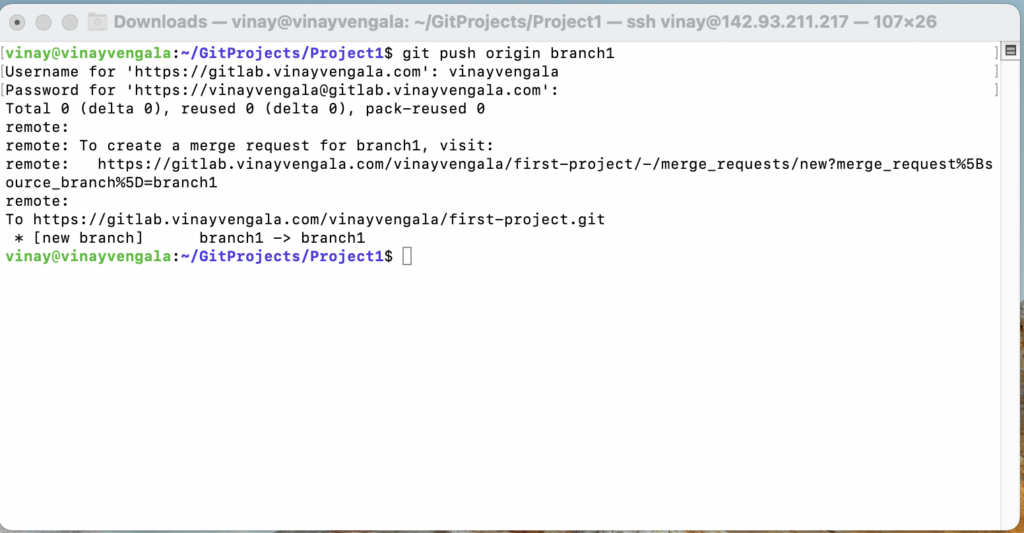 Now, let us look at our repository: 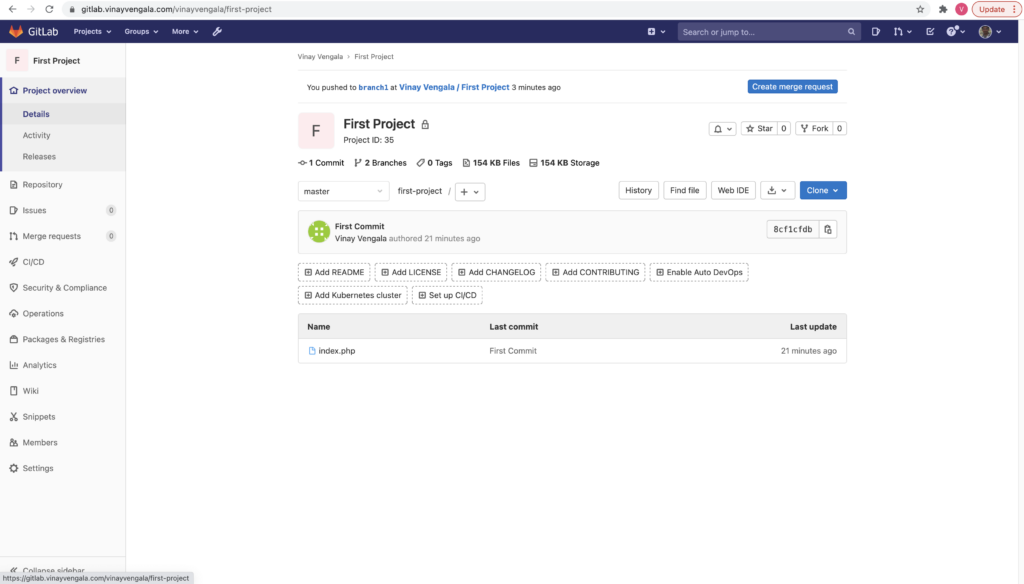 When it comes to syncing a remote repository, the pull command comes in handy. Let us take a look at the commands that can leads to the pulling operation in Git.

We will use these as shown below: 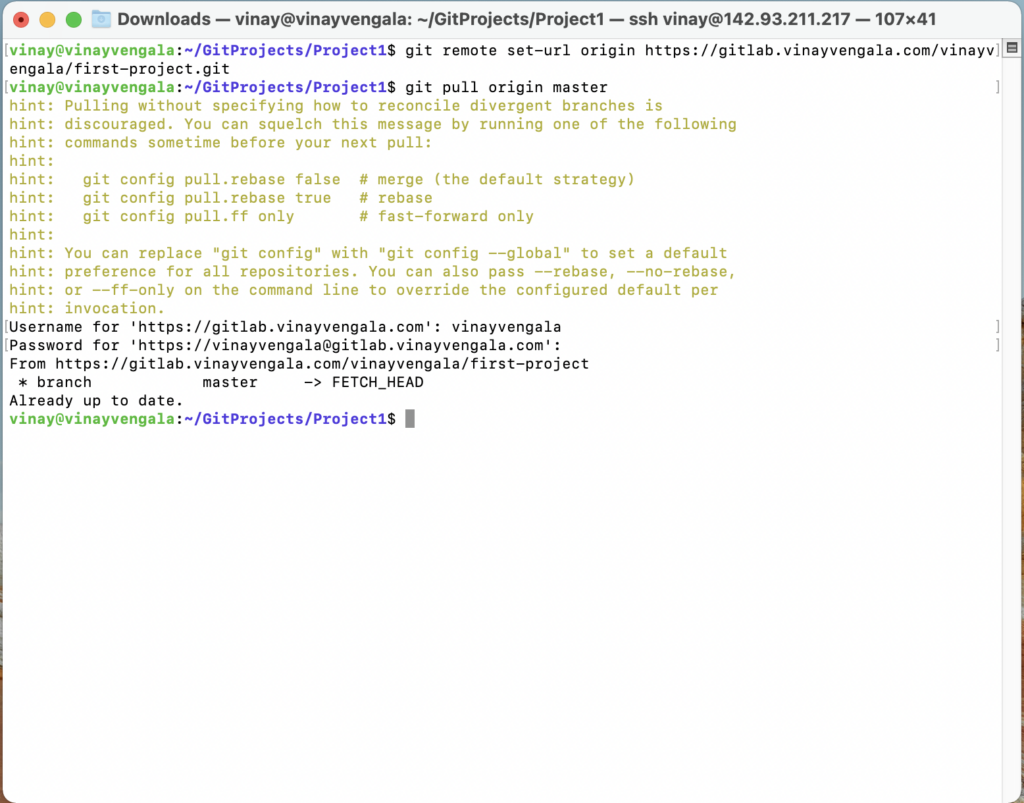 Now that we have learned the workflow of Git with the help of the common Git commands, let us take a look at branching, merging, and rebasing and also at how and when to use them. 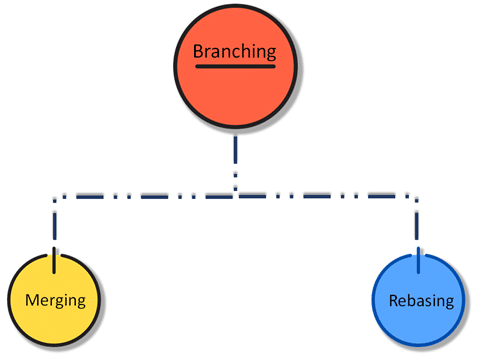 We are almost familiar with various Git commands now. Let’s take a step further and discuss one of the most important operations in Git, namely, branching. In branching, we mainly make use of the git checkout and git branch commands.

Every node in the figure above represents commits. We have to note that for the ‘y’ node in the feature branch, ‘x’ is the base.

Step 1: We will run git checkout -b <new branch name>
Step 2: Then, we will use the git branch command to confirm that our branch is created 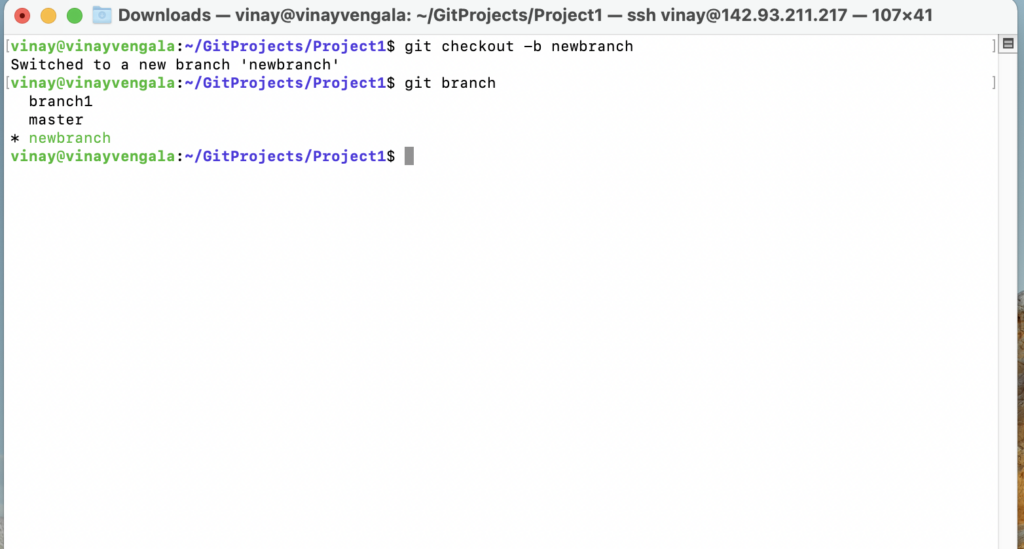 We can see from the above image that we have created a branch called ‘branch1’ and we automatically got landed in the new branch. Again, just to see which branch we are currently in, we run another command, git branch.

Note: The * mark before the branch name shows that it is the current branch.

Now, how to change a branch to the master branch? For that, we use the following command:

Now that we have learned how to create a branch and work on it, let us take a look at the merge feature in Git by merging the branch we created to the master branch.

Let’s take the above example. Say, we have a master branch and a feature branch.

The merge commit represents every change that has occurred on the feature branch since it got branched out from the master.

Note: Even after merging, we can go on with our work on both the master and the feature branches independently.

Let us see how to perform merging:

Step 2: Create a new file in the branch

Step 3: Add changes from all tracked and untracked files: To do this use git add . or for single files use git add file1 file2

We have created another branch on our master branch. Now, we will see how to perform merging.

Let us get inside the master branch using the following command:

After that, we will perform merging with the help of the below command:

The disadvantage of merging:

Now that we have successfully learned to branch and merge with Git and GitHub, further in this Git tutorial, let us look at yet another important Git operation, i.e., rebasing.

When our project becomes relatively large, the commit log and the history of the repository become messy. Here, we use rebasing. Rebasing will take a set of commits, copy them, and store them outside our repository. This helps us maintain a linear sequence of commits in our repository.

Let us take the same example. Here, we will rebase the master branch and see what happens.

The advantage of rebasing:

The disadvantage of rebasing:

Now that we understood what branching, merging, and rebasing are, next in this Git tutorial, we will see where to use merging and rebasing.

The golden rule of Git merging and rebasing:

As we have already mentioned earlier in this Git tutorial, one major disadvantage of merging is merge conflicts, which can be backbreaking for a team project. Let us understand how merge conflicts occur and how to resolve them.

This drawback of the merging operation in Git can be explained with a simple example shown below: 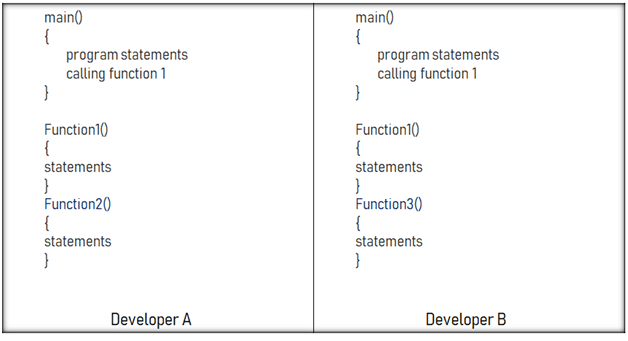 Say, we have two branches of the master branch, branch1 and branch2, and two developers are working on these two branches independently but on the same code file.

As we have seen in the above image, the developers have made the below-mentioned modifications:

How to merge these two modifications? That is where the merging conflict occurs.

We can manually resolve the merge conflict using the merging tool. We can use file locking which doesn’t allow different developers to work on the same piece of code simultaneously. It helps avoid merge conflicts but slows down the development process.

The rebasing conflict can also be solved with the help of the Git merging tool.

Now, let us look at a few Git workflows briefly before we end this Git tutorial so that we get an idea which Git workflow to choose for our team project.

In this section, we will get introduced to different workflow options available in Git. Once we get an idea of these workflows, we can choose the right one for our team project.

But, why is it important to choose the right Git workflow?

Depending upon the team size, choosing the right Git workflow is important for a team project to increase its productivity.

Now in this Git tutorial, let us look at the different Git workflows: 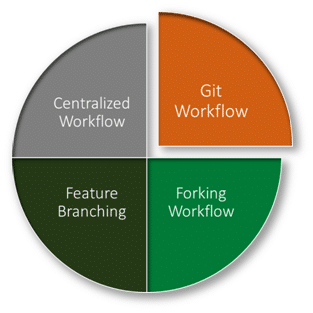 This brings us to the end of the Git tutorial. In this Git tutorial, we have gone through the version control systems and its different types, the basics of Git, terminologies related to Git, Git installation in Windows, Linux, and on macOS systems, setting up and working on the GitHub repository, and various commands used in Git. We have also discussed some important operations in Git toward the end of this Git tutorial.

A little about the Author 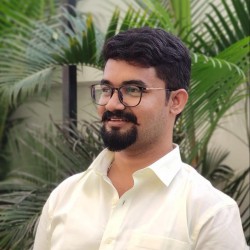